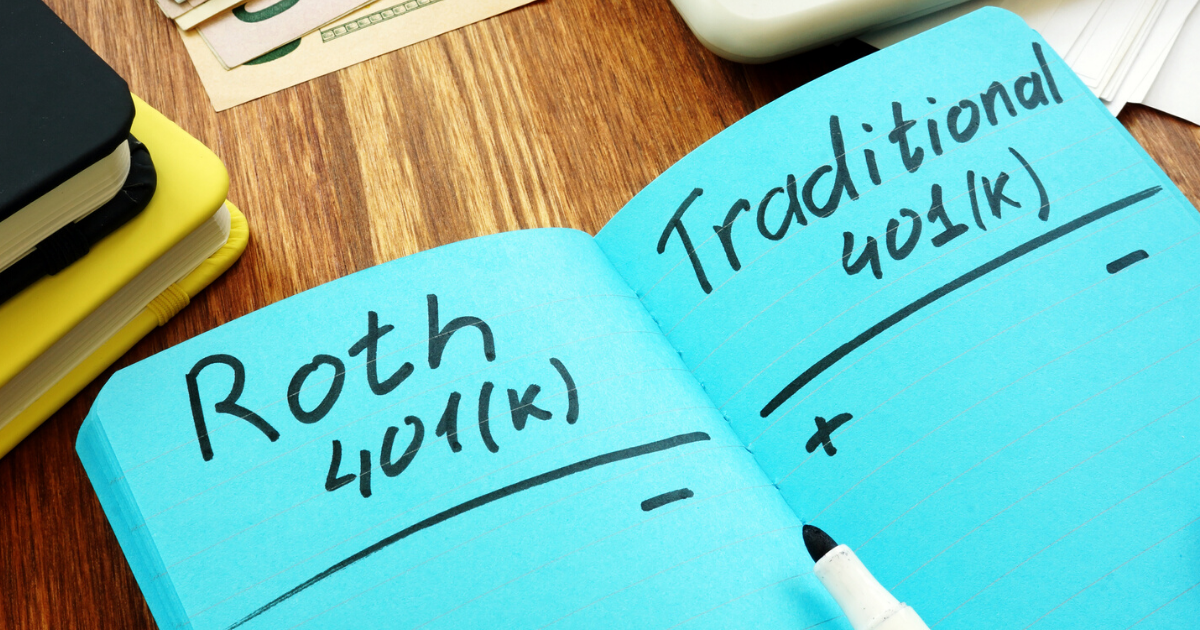 2018 brings us new tax brackets, and thus, it’s time to revisit whether we should be using the ROTH 401k or the Traditional 401k. We have written about this subject before and as it was then, the answer remains the same, the Traditional 401k is a significantly better choice for most of us, and it could save you from running out of money during retirement.

Let’s revisit with Joe and Jane, our married couple from our previous study. They file jointly and make $100k per year in taxable income. Every dollar that they make in 2018 above $77,400 is taxed at their marginal rate of 22% and their effective rate on the entire $100k is 14%. (We’ll round the numbers to keep them clean.)  This difference in taxation, marginal vs. effective,  is the key difference between the Roth and Traditional 401k, and it’s why the Traditional 401k is better. To illustrate how powerful this is, let’s look at an extreme example where we save for retirement only in 2018, and then upon retirement, we take out the entire balance of our retirement account. This is unfavorable for the Traditional 401k and it’s unlikely in real life, but it best illustrates the point of just how much better the Traditional 401k is. For simplicity, and because it won’t change the answer,  we won’t factor in deductions, exemptions, social security, or Medicare.

Here is what’s happening in the chart. Both the traditional 401k and the Roth 401k start with 10k. The traditional 401k doesn’t pay any taxes right away while the Roth does, hence the different starting values. Each account doubles every 10 years for 40 years, at which point we take out the entire balance. In the traditional 401k, we take all $160k out and pay 17% in taxes (the effective rate), or $27k, and in the Roth, we don’t pay anything. (We are using the 2018 tax bracket at our retirement date.) The result is $8k better for the Traditional than the Roth. But what if taxes are higher? Well, in the past 50 years, the lowest brackets, 10% and now 12%, have never been higher than 15%, so we will use 10% and 15% for those, and once we reach retirement, we will increase our 22% bracket to 30%, which historically, is above average and near the higher end of where that bracket has been.

Now, the Traditional 401k is breaking even with the Roth 401k, but, this is an extremely unrealistic and worst case scenario for the Traditional 401k, and yet it still breaks even! In the real world, Joe and Jane will save each year for retirement, instead of just during one year, and once they retire, they will pull out only a portion of their retirement accounts each year. Using the 2018 rates for the entirety of Joe and Jane’s life, we can see what such a scenario would look like below.

The Traditional 401k has an 8% advantage over the Roth 401k. If we assume that taxes go up in the future, it’s highly unlikely that the Roth would ever be the better choice, as there has only been one time in the past 40 years where Joe and Jane’s effective tax rate would have exceeded 22%, and that’s 1981! This means that even if we only made a retirement contribution in 2018, and waited 40 years to start taking it out, the odds that the Traditional 401k is better than the Roth 401k are very high. When you factor in what happens in real life, where you actually save money each year for retirement, this only increases the advantage that the Traditional 401k has, since you will get increased pretax savings at your highest marginal tax rate each year when taxes go higher, while getting to withdrawal money in retirement at your effective tax rate, which will be lower! The example below shows what would happen if taxes increase.

Putting everything we have talked about together, we can run a real-world example for Joe and Jane. They will save $10k per year for 30 years, retire, and then spend $40k per year in retirement until they die 30 years later. For simplicity, we will keep the tax rates as the 2018 rates for the entire duration of the example. Here are the results. 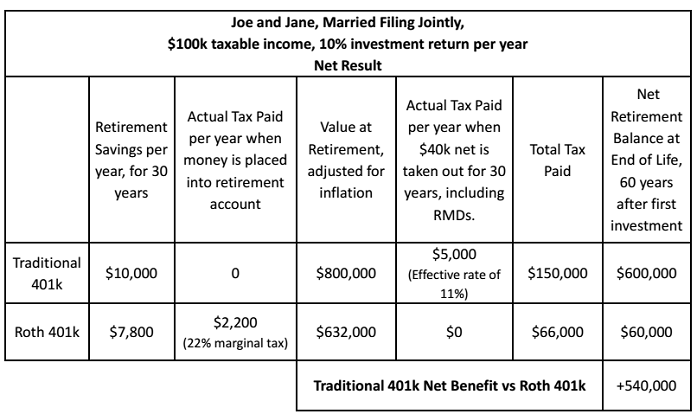 Let’s look at the same real-world example for a high net worth couple, Brad and Bonnie. They will save the max of $37k per year for 30 years, retire, and then spend $100k per year in retirement until they die 30 years later. For simplicity, we will keep the tax rates as the 2018 rates for the entire duration of the example. Here are the results. 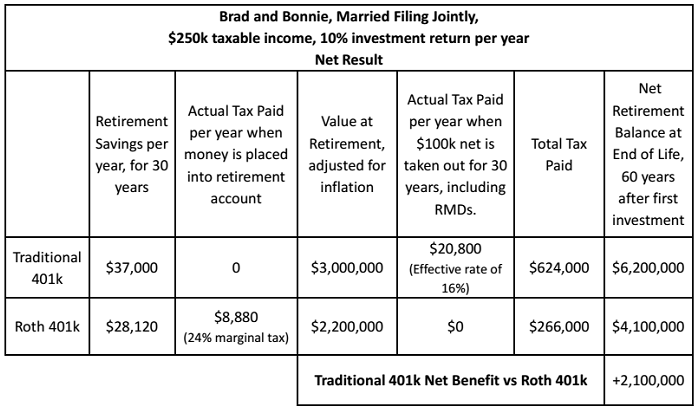