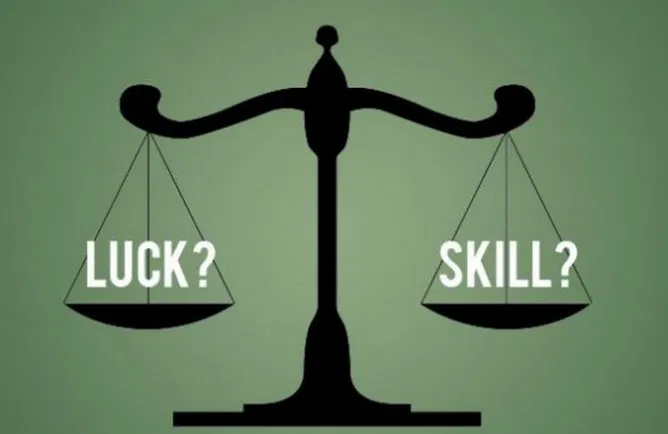 The Difference Between Luck and Skill

Not realizing the difference between luck and skill puts you on a road to ruin.

We came across an excellent article written by the Motley Fool we and wanted to share it with you. It correctly reminds investors that while you can control the process, you can’t control the outcome, so make sure that your investment process is steeped in wisdom.

By Morgan Housel , The Motley Fool- Published in USA Today

Meet the world’s luckiest investor. His name is Richard. You’ve probably never heard of him.

Richard has compounded money at 24.55% annualized for the last 30 years, compared to 9.4% for the S&P 500 (SNPINDEX: ^GSPC ) . That difference is staggering. One dollar invested with Richard 30 years ago would be worth $712 today, versus $15.30 if you invested in the S&P 500. He’s only had three down years. Richard has actually outperformed Warren Buffett’s Berkshire Hathaway over the past three decades.

Why have you never heard of Richard? Well, his name isn’t actually Richard. As far as I know, at least.

Richard is the winner of an Excel model I made that generated random investment returns for 65,000 hypothetical investors during the last 30 years. (The model was guided by the boundaries of the market’s actual historic returns.)

Let me reiterate: Richard’s results are achieved from sheer randomness, the equivalent of throwing darts at a board, or pulling bingo balls out of a cage.

Richard is alive because of a simple law of probability: If you conduct enough experiments, you’ll get a few crazy results, thanks to pure randomness. I named our hypothetical world’s luckiest investor after Richard Lustig, the real-life man who has won the lottery seven times.

There are millions of investors in the world. Many of them are actively trading in and out of stocks, picking what they think are the best investments. With that many investors, we are virtually guaranteed that a few of them — but just a few — will be hugely successful over time due to nothing more than random chance.

Richard almost certainly exists somewhere. Some of the world’s most successful investors are actually just some of the world’s luckiest investors. I don’t know what Richard’s real name is. Maybe it’s George Soros, or Peter Lynch, or John Paulson, or David Tepper. We’ll never know for sure.

What do you do in this situation? How do you know which investor to follow, to idolize, to learn from, in a world where it’s hard to tell who has been successful and who has been lucky?

The key to identifying talent versus luck comes down to understanding the difference between process and outcome. As Barry Ritholtz put it last week:

Outcome is simply the final score: Who won the game; what numbers came up in a roll of the dice; how high did a stock go. Outcome is the result, regardless of the method used to achieve it. It is not controllable. You can blow on the dice all you want, but whether they come up “seven” is still a function of random luck.

Process, on the other hand, is a specific methodology. It is a repeatable approach to any challenge or endeavor, be it construction or medicine or investing. And you can control a process.

Buffett made this point decades ago in a speech called, “The Superinvestors of Graham and Doddsville.” Say we set up a national coin-flipping contest. By sheer chance, more than 200 people in the country will correctly call 20 coin flips in a row. Even if the coin flips were done by orangutans, Buffett pointed out, this is what you’d expect.

But what if you found out that of those 200 successful orangutan coin-flippers, half came from the same zoo in Nebraska? Then you’d realize what was going on was more than random chance. Buffett stated:

I think you will find that a disproportionate number of successful coin-flippers in the investment world came from a very small intellectual village that could be called Graham-and-Doddsville. A concentration of winners that simply cannot be explained by chance can be traced to this particular intellectual village.

That intellectual village was value investing, influenced by Ben Graham and David Dodd.

What made value investors legitimate success stories was not just their superior returns. It was their rational process of buying companies with high returns on capital for less than liquidation value and holding them for longer than most investors were willing to.

Your definition of a rational investment process may be different than mine. But when I hear of investors successfully predicting a market crash by overlaying a chart from the 1920s, or day trading penny stocks, or using a protractor on a candlestick stock chart, I get suspicious. When you find yourself asking, “How can they make that much money doing that?,” remember Richard.

Not realizing the difference between luck and skill puts you on a road to ruin. When returns are the result of luck, the person who earned them is going to assume whatever absurd technique he or she used is pure skill, and is likely to keep using that technique with a false sense of confidence. That’s dangerous, because luck quickly reverts to the mean — if I kept my Excel model running long enough, Richard will eventually come crashing back to Earth.

That’s why process matters so much more than outcome. Investors shouldn’t just focus on returns. What you want is a rational process that offers the highest chances of success over long periods of time without relying on luck. Earning a lower return than your lucky friend Richard shouldn’t bother you if he’s flipping a coin or day trading penny stocks. Your rational investing process is far more likely to win out in the long run.

“We have no control over outcomes, but we can control the process,” Michael Mauboussin once wrote. “Of course, outcomes matter, but by focusing our attention on process, we maximize our chances of good outcomes.”

The Motley Fool is a USA TODAY content partner offering financial news, analysis and commentary designed to help people take control of their financial lives. Its content is produced independently of USA TODAY.